Appellate Division, First and Second Departments: Ensuring that the Co-Appellant or Cross-Appellant Shares in the Cost of the Joint Record/Appendix. 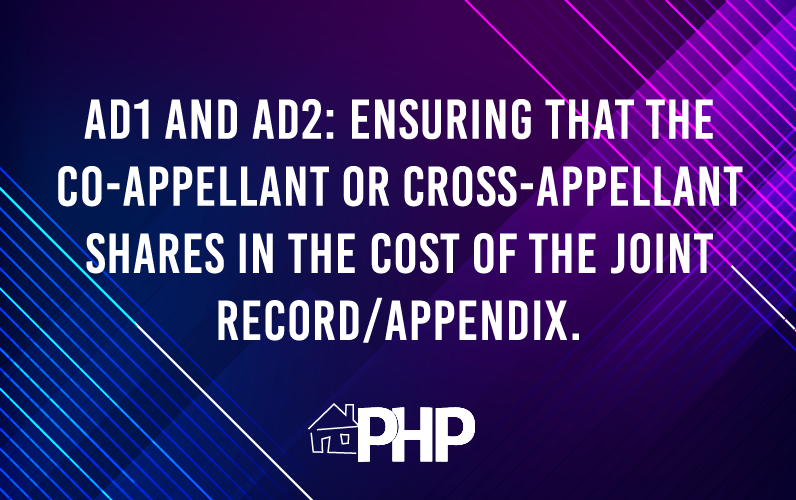 Appellate Division, Second Department: “Unless otherwise ordered by the court, all parties appealing from the same order or judgment shall consult and thereafter file a joint record or joint appendix which shall include copies of all notices of appeal. The cost of the joint record or the joint appendix, and the transcript, if any, shall be borne equally by the appealing parties. (see ‘670.8(c))”

As the rules in both Appellate Division, First and Second Departments suggest, you should contact your adversaries with respect to the contents of the Joint Record or Joint Appendix to ensure that all appellants are on the same page. Do not simply assume that if you were served with a notice of appeal/cross-appeal that your adversary is aware of the cost-splitting rule and will happily comply with it.

Moreover, it may very well be that your adversary may not intend to perfect the appeal. In that instance, it would revert to a Record or Appendix and cost splitting would be rendered moot. In addition, when reviewing the Order being appealed, determine whether any other parties were adversely affected by the subject Order. If so, call that party to inquire as to whether he or she intends to appeal that portion of the Order that adversely affected them.

If all else fails and your adversary refuses to share in the cost of the Joint Record or Joint Appendix, you may be forced to move to compel him to do so in the Appellate Division. Rest assured that the Appellate Division will not take kindly to the flouting of the very clearly stated rule regarding cost splitting.