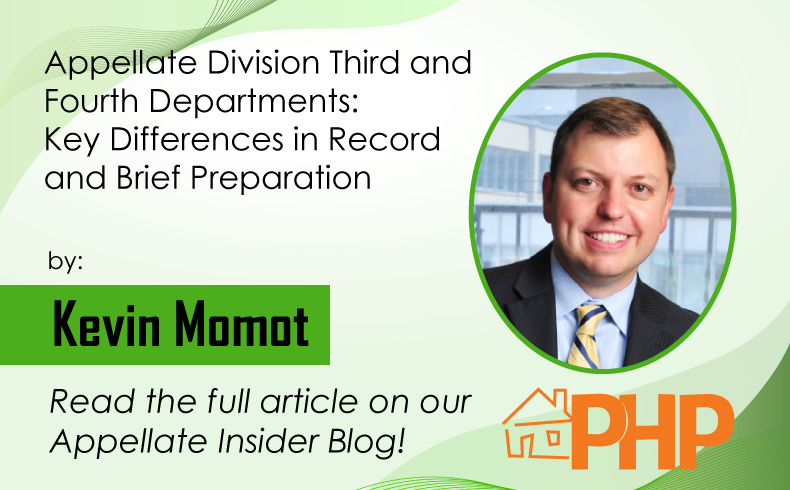 The statewide Practice Rules of the Appellate Division, effective as of 2018, have unified (mostly) the form and process concerning Record and Brief preparation across all four appellate divisions in New York. But focusing on the Third and Fourth Departments in particular, there are still some unique distinctions to keep in mind that differentiate these courts. When perfecting by Appendix method in either the Third or Fourth Department, in addition to the required hard copies/digital copy of the Appendix, both courts require a digital copy of the complete Record to be submitted as per statewide Rule 1250.9(a)(2)(ii). Further, the Third Department, Rule 850.9(a), also requires one hard copy of the Record to be filed with the court. In the Third Department, Rule 850.14 has also primarily differentiated the unique circumstances involving workers’ compensation and unemployment insurance appeals, which are part of the court’s typical caseload. In the Fourth Department, Rule 1000.7(a), pursuant to its local rules of practice, the Notice of Appeal as incorporated in to the Record or Appendix must also include proof of filing and service. Also, unlike the other three appellate divisions, the Fourth Department has (for the most part) retained its cover color requirements for submitted Briefs, similar to the color cover requirements on federal appeals in the U.S. Court of Appeals for the Second Circuit. Appellant/petitioner (blue), respondent (red), reply (gray), surreply when applicable (yellow), intervenor/amicus curiae when applicable (green). See Rule 1000.8(a). Brief cover treatment applies to both the hard copies and electronic filings. When perfecting on the reproduced full Record method or Appendix method in the Fourth Department, although 6 total hard copies of the Brief are still required to be filed (one original and five copies), the total number of hardcopies of the Record/Appendix required to be filed at the court has been reduced from 6 to 3 (one original and two hard copies). This does not apply where a party is exempt from filing a digital copy, in which case the rules covering to hardcopy submissions, generally, would dictate. There are other distinctions in these courts relating to perfecting on the original Record, such as statewide Rules 1250.5(e), 1250.9(a)(4)(ii), and 1000.9(c)(2) in the Fourth Department, and Rule 850.5 in the Third Department which must also be noted. Contact us to review in detail or discuss any other important requirements unique to filing by this method.