Are Oral Argument Transcripts of the Underlying Motion Being Appealed Appropriate for Inclusion in a Record on Appeal? 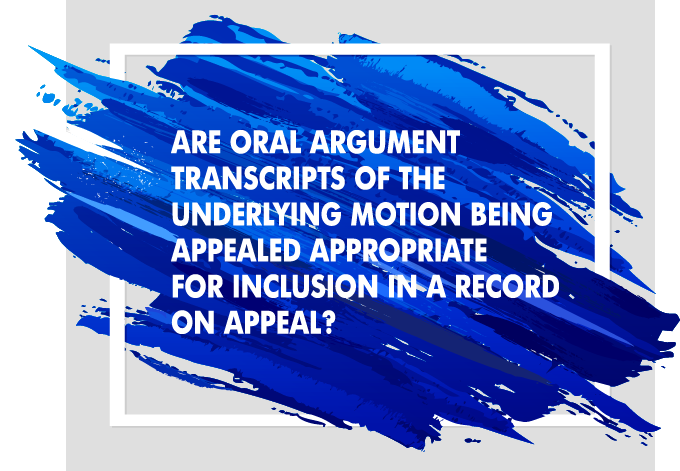 Oral argument transcripts (when available) should always be included in any record on appeal submitted to an appellate court. Arguments held before the lower court give the appellate court an invaluable insight into the reasoning employed in reaching the decision and order appealed from. There is often give and take between the attorneys and the lower court justice over points of fact and law, which are important to take into consideration on the appellate level.

A transcribed lower court argument also removes any doubt on the appellate level as to whether or not the lower court justice misapprehended any arguments before him/her. In the case of complicated and extensive motion practice, it can give the appellate court a clearer and more concise idea of the process employed by the lower court in reaching its decision. It also provides a mapping of the relief sought and the opposition thereto.

Positions stated in the transcribed argument would now be considered factual parts of the record on appeal and must be included. Also any decisions stated by the lower court justice on the record would carry the same weight as a written memorandum of opinion and can be considered in the same manner by an appellate court.