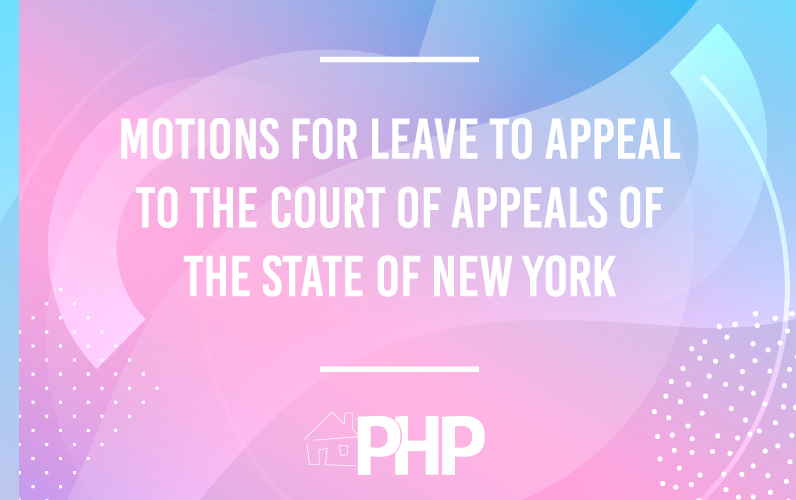 Motions for Leave to Appeal to the Court of Appeals of the State of New York (hereinafter, the “NYSCA”) are one of the few instances in the law (if not the only one) where an attorney has two bites at the apple. To wit, the losing attorney at the Appellate Division may file/serve a Motion to reargue, or in the alternative, for Leave to Appeal to the NYSCA, together with a $45 filing fee, and make that motion returnable in the Appellate Division on a Monday. If the Appellate Division grants leave, then a copy of the Order granting leave to appeal, together with a Preliminary Appeal Statement, is forwarded to the NYSCA. Thereafter, the NYSCA will issue a briefing schedule and the appeal will ultimately be perfected at the NYSCA.

If, however, the Appellate Division denies the motion, the movant may make the same motion, seeking the same relief, returnable in the NYSCA, also on a Monday. This motion be accompanied by a $45 filing fee as well as one complete copy of the Record/Appendix along with all Briefs which were filed in the Appellate Division. If the NYSCA grants leave to appeal, the Appellant would again file the Preliminary Appeal Statement with the Court and then await a briefing schedule for purposes of perfecting the appeal.

In either case, once the appeal is to be perfected in the NYSCA, the Record on Appeal which is to be served and filed is remarkably similar to that which was filed in the Appellate Division. Specifically, the Record would simply add the Appellate Division Order being appealed, the Order granting leave to appeal, a Statement pursuant to CPLR § 5531 and a Statement pursuant to CPLR § 2105 certifying the accuracy of the Record on Appeal. The requisite number of Records and Briefs are then filed (and served) together with a $315 filing fee payable to the NYSCA and the electronic filing is completed via CourtPass.