New York State Appellate Division First Department Calendar: What Does It All Mean? 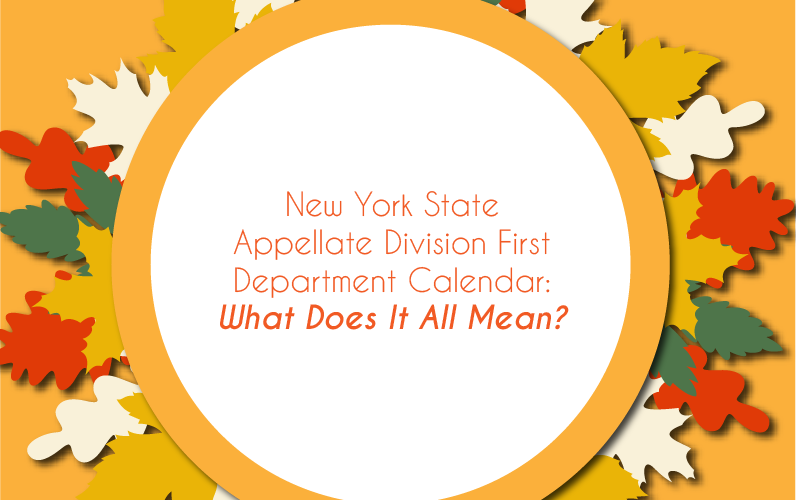 The Appellate Division-First Department (unlike the Appellate Division- Second Department) works off a calendar complete with various Terms for the entire year.  There are specific due dates for the Record on Appeal/Appellant’s Brief, the Respondent’s Brief and the Reply Brief in each Term.  There is also a due date on the calendar for Oral Argument Time Requests and Adjournment Stipulations.

The Appellate Division-First Department calendar means different things to each individual attorney, law firm or client being represented in the appeal, primarily since each one has its own reasons for perfecting for a specific Term or waiting until the last minute and filing within the 6 months allowed by the First Department’s rules.  The reasons for filing early can vary widely but commonly can be boiled down to strategy, timing, monetary decisions and other variables which may be going exist in a particular case. One of the common reasons for perfecting an appeal earlier is one’s desire to have the appeal heard in a specific Term in the hope of obtaining a decision on the appeal sooner rather than later.  There are also instances where a Stay will remain in effect only if an appeal is perfected by a particular Term.  In those cases, attorneys may also be compelled to perfect the appeal prior to the nine month deadline.

Unfortunately, in some instances, perfecting one’s appeal for a specific Term does not guarantee that oral argument will be heard for that Term. There are instances when the volume of appeals filed for a specific Term can cause an overload to the Court’s calendar that it adjourns (on the Court’s own Motion) the appeal to the following Term. This is one reason some appellate attorneys prefer to perfect their appeal as quickly as possible.

When consulting with clients on an appeal in the Appellate Division-First Department, it would be prudent to discuss the various options available for scheduling the appeal and which strategy best suits their needs.  In the end, the timing of your appeal can be just as valuable as the argument you are making.